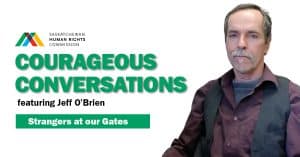 The Saskatchewan Human Rights Commission will hold its 71st Courageous Conversation on Thursday, March 18 2021, at 10:00 AM.

The speaker is Jeff O’Brien. His conversation is titled “Strangers at our Gates: Immigration in Early Saskatchewan.”

In Saskatchewan, we celebrate our ethnic diversity with the motto “From Many Peoples, Strength.” But one does not have to dig too deeply into our history to find instances when the welcome provided to the “stranger at our gates” has been reluctant, to say the least. Focusing primarily on Saskatoon, this session looks at immigration to Saskatchewan from the 1880s to 1930s, and tries to draw useful parallels for the people living here today.

Jeff O’Brien was born in Saskatoon and raised in Regina where despite his best efforts to the contrary, he received an undergraduate degree in Canadian history. He went on to earn a master’s degree in archival studies from the University of British Columbia before returning home to Saskatchewan where he eventually settled down as the City of Saskatoon Archivist in 1997.

As Saskatoon’s City Archivist, Jeff believes in bringing history out of the archives and into the community. He has written extensively about Saskatoon, including the co-authoring the book Saskatoon: A History in Photographs in 2006. He is a regular speaker in city classrooms, at local events and to community groups. As well, he can often be seen and heard on radio and TV talking about the history of his adopted city.

Attendees are encouraged to email questions in advance of the Courageous Conversation.

Please RSVP via email to adam.hawboldt@gov.sk.ca  by Wednesday, March, 18.