International Day for the Elimination of Racial Discrimination 2021 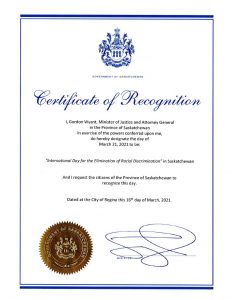 Today, we join people throughout Saskatchewan and around the world in recognizing the International Day for the Elimination of Racial Discrimination.

Since 1966, when the United Nations first proclaimed this date to be the International Day for the Elimination of Racial Discrimination, March 21 has been a day that brings us together to reject racism, to speak out against discrimination, and to remember the 69 people who lost their lives in 1960 while peacefully demonstrating against apartheid in Sharpeville, South Africa.

This year, the theme for this day is “Youth standing up against racism.”

On Friday, March 19, as a precursor to the 2021 International Day for the Elimination of Racial Discrimination, Chief Commissioner David Arnot spoke to an online group of approximately 400 students and teachers from the Saskatoon Public School Division about racism.

He urged the group to stand up, speak out, and challenge racial discrimination in all its forms.

Chief Commissioner also stressed the importance of education as an antidote to racism, discrimination, and hate.

“Education is the most powerful weapon we have to combat racism,” he said. “Nobody is born hating another person because of the colour of their skin. People are taught to hate. And if that is the case, then people can also be to taught to love. They can learn empathy, understanding, and respect.”

Near the end of his talk, Chief Commissioner Arnot reminded the students about the need for respect.

“Respect your teachers. Respect your parents. Respect your classmates, your friends and yourselves,” he said. “That doesn’t simply mean respecting the similarities you share, but also the differences … it is these differences that make your schools, our community, our province, and this country great.”

Nancy Barr, a teacher at Breevort Park School in Saskatoon, organized the event to help inform students, create awareness, build better citizens, and inspire students to be the change they want to see in the world.

“When we get together and have these discussions about these big issues, it puts a spotlight on things we need to change to make our community stronger,” she said. “Having kids remember that these things happened in history, and having them be aware that racist and discriminatory acts are still happing today in our society – that people are being hurt and discriminated against because of the colour of their skin or their religion or their sexuality or gender – it is something they need to know so that they can build our future. A better future.”