The United Nations honours the proclamation of the Universal Declaration of Human Rights every December 10 with a theme that is part commemoration and part challenge. This year’s slogan, “Human Rights 365,” expresses the belief that human rights are part of our individual identity every day and at all times.

An affirmation of the immutability and persistence of individual rights recently took place in the Legislature of Saskatchewan on December 8, 2014. The addition of “gender identity” as a prohibited ground to The Saskatchewan Human Rights Code eliminated any uncertainty about the rights of transgender people in our province. It is, unequivocally, contrary to the Code to discriminate against someone for their internal, deeply held, sense of their gender.

The inclusion of gender identity in the province’s legislation just two short days ago was another defining moment for human rights in Saskatchewan. It represented a coming together of the people and leadership to take a stand against discrimination. Advocates for the transgender community had been asking for changes to the Code that would clarify the rights of transgender people. Legislators had been working hard to find language that would not have unwanted outcomes.

Including gender identity in the Code erases any remaining ambiguity – transgender people are, as they have always been, fully protected. The Saskatchewan Human Rights Commission will, as it has done in the past, work to promote and protect the human rights of transgender citizens in our province. 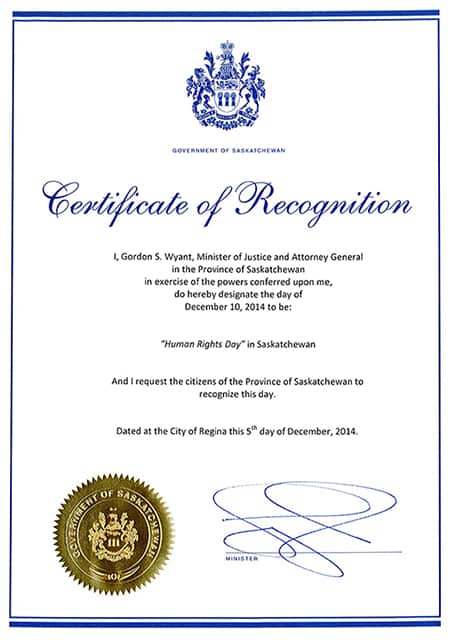 In his message for Human Rights Day, UN Secretary-General Ban Ki-moon stated that, “human rights are for all of us, all the time: whoever we are and wherever we are from; no matter our class, our opinions, our sexual orientation.” It is fitting that on this internationally recognized day, the citizens of our province can celebrate a significant made in Saskatchewan contribution to human rights.