Home > News & Events > In the Community

“I would like to thank Tribal Chief Mark Arcand, the Saskatoon Tribal Council, their many volunteers, and the numerous people who organized this event,” said Chief Commissioner Wilcox. “Educational events like these are essential for meaningful reconciliation. Everyone must learn the truths of our shared history and what happened at residential schools. Education plays a vital role in uncovering, illuminating, and understanding these truths.”

The STC’s Truth and Reconciliation Education and Awareness event included teachings from Elders and Knowledge Keepers and experiences of residential school survivors, as well as drums and sacred dances by traditional dancers.

“We need to work together to achieve mutual respect and understanding,” said Chief Commissioner Wilcox. “By respecting and understanding one another, we can help shape our shared path to healing and reconciliation.” 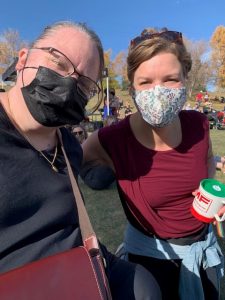 Commissioner Heather Kuttai (left) and City Councillor Hilary Gough (right) were two of the many people who participated in the 2021 Saskatoon AIDS Walk.

The annual fundraising event, which began in 1993, was hosted by Prairie Harm Reduction, OUTSaskatoon, and Saskatoon Sexual Health. With more than 160 participants, the 2021 AIDS Walk raised a record-breaking $90,000.

Proceeds from the event help fund programming, support services, education, and resources for people living with and impacted by HIV/AIDS in Saskatoon and surrounding areas.

“The Saskatoon AIDS Walk is an important day that I circle on my calendar every year,” said Commissioner Kuttai, who raised $2,738 for the event. “Not only is it a fundraiser, but it also helps raise awareness about the realities of AIDS/HIV in Saskatchewan.”

Currently, Saskatchewan has the highest HIV rate in Canada –more than double the national average.