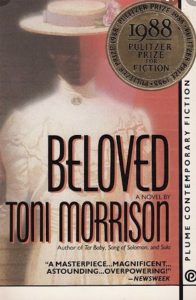 February is Black History Month and an opportunity to spotlight Black and/or African American and African Canadian authors. There is a wealth of novels to choose from and a handful are listed at the end of this review. I had to narrow it down, however, and although written decades apart, Beloved, by Toni Morrison, and Washington Black, by Esi Edugyan are stories about what it was like to be enslaved and living just on the cusp of, and shortly after, emancipation. With shared themes of historical injustice and psychological trauma from white oppression, both novels chronicle the stories of protagonists Sethe (in Beloved) and Washington (or “Wash” in Washington Black) in their complicated roads to freedom, and explore what that sovereignty means.

Because freedom, as it turns out, isn’t simple or straightforward for either of these characters. In Beloved, Sethe is haunted by her past as an enslaved person and the multiple traumas she endured at the hands of the white people who enslaved and continually hurt her. Many argue that Sethe is psychologically stuck, and even enslaved, by the past oppression and violence; Morrison muses, “Freeing yourself was one thing, claiming ownership of that freed self was another.”

Similarly, Big Kit, the only parental figure Wash had, tells him early on that freedom is to, “go wherever it is you wanting.” And Wash certainly goes – from Barbados to America to Nova Scotia and England – but throughout his travels and adventures, he is continually conflicted by what he wants, where to go, and what it means to be truly free. In other words, just because emancipation happened for these characters, does not mean the psychological scars and physical traumas of being a white man’s possession simply disappear. The after effects are real and can be passed down generation to generation.

Other notable novels to consider reading this month: